This walk starts at the Gribdale Gate car park near Great Ayton and goes to Captain Cook’s Monument on Easby Moor and then continues in a clockwise direction to Roseberry Topping. As well as the two summits the walk passes through woodland, moorland and farmland. There is a little road walking but on very quiet roads. I would describe the route as moderate mostly with a couple of short strenuous climbs. The whole of the walk is accessible to dogs.

If you are arriving by car, use the free car park at Gribdale Gate and follow the walk directions as laid out below starting with Gribdale Gate Car Park to Captain Cook’s Monument. For your satnav use postcode TS9 6HQ which gets you to Dikes Lane. Drive along the lane for a while until you reach the car park at the end.

Great Ayton is on the rail network with services operated by Cross Country Trains. If you have arrived by train leave the station and turn right onto Station Road. After crossing the railway line Station Road runs into Dikes Lane. Walk along Dikes Lane until you reach Aireyholme Lane on the left. Now follow the walk instructions starting with Dikes Lane to Roseberry Topping. You’ll climb Roseberry Topping first and end your walk with a visit to Captain Cook’s Monument finally descending back to Dikes Lane and the railway station.

I shouldn’t think there is ever a day when Roseberry Topping isn’t climbed by someone. In summertime and on fine weekends it can be very busy, so opt for a midweek walk if you want to avoid crowds and hassle finding a car parking space. If the car park at Gribdale Gate is full you can always try parking in Great Ayton and starting the walk from the crossroads on Dikes Lane.

In springtime, Newton Wood is full of bluebells and looks quite magical with its blue carpet of flowers. Walk later in the year in late summer and the heather on the moor is in flower. When it is flowering there are some spectacular views to be had of Roseberry Topping and the purple heather. In winter parts of the walk can be quite muddy, especially the descent through the woods from Captain Cook’s Monument.

The monument is an 18 metre high stone obelisk erected in 1827. James Cook was an explorer, navigator, cartographer and captain in the Royal Navy. He is best known for chartering New Zealand and the Great Barrier Reef in Australia.

The memorial overlooks Marton where James Cook was born in 1728 and also Great Ayton where the famous explorer was educated between 1736 to 1740.

The inscription on the monument reads “In memory of Captain Cook the celebrated navigator. A man in nautical knowledge inferior to none. In zeal, prudence and energy are superior to most. Regardless of the danger, he opened an intercourse with the Friendly Isles and other parts of the Southern Hemisphere. Born at Marton in 1728. Massacred at Owhyee (Hawaii) in 1779 to the inexpressible grief of his countrymen.”

The obelisk is hollow, and originally it had a doorway. For some reason, this seems to have been filled in when the monument was restored in 1895.

Roseberry Topping has a very distinct profile and is an iconic landmark for the local area. It has been likened in shape to the famous Matterhorn of Switzerland, although it’s nowhere near as high of course. It provides a draw for the eye from miles around due to its fairly isolated position. Despite its impressive shape Roseberry Topping is only 320m high. If you are reasonably fit you can climb it in half an hour from the public car park in Newton-under-Roseberry.

The hill has not always been this shape. 18th Century paintings picture it as a larger, pyramid-shaped hill, taller than it is today. Because of mining activity, one side collapsed in 1912. The Roseberry Ironstone Mine was blamed for this event, although geological factors may have played a part as well.

Regardless of who to blame this event created the side with the straight down edge and the hill’s distinctive shape.

This section of the Cleveland Way is covered by the Explorer OL26 Ordnance Survey map. The map displays the western area of the North Yorkshire Moors, the Cleveland Hills, and a section of the Howardian Hills. With this map, you also get a code for use on your iOS or Android smartphone or tablet. The OS Explorer map for the North Yorkshire Moors – Western Area is available in both the standard paper version and weatherproof ‘Active’ version.

To begin the walk take the track that’s part of the Cleveland Way and signposted towards Kildale. The track leads up into the woodland. If you are lucky you might see some deer. This broad track climbs quite steeply towards Easby Moor where the woodland is left behind and moorland opens up.

You can see the Captain Cook Monument in front of you now. As you walk towards the monument there is a memorial to an air crash that happened on the night of 11th February 1940 during the Second World War. A Lockheed Hudson aircraft took off from nearby Thornaby airfield to look for German Minesweepers off the coast of Denmark. Shortly after takeoff, the plane crashed. Ice had formed on the windscreen blocking the pilot’s vision, and also on the plane’s wings. Because of the ice on the wings, the plane had failed to climb sufficiently to clear the hill. One of the crew survived but sadly the other three died.

Captain Cook’s Monument is 324 meters above sea level and almost 1km from the car park. The area around the monument has panoramic views in all directions, along the curve of the Cleveland Hills, down into Great Ayton, across to Roseberry topping and back onto the North Yorkshire Moors. The area immediately around the monument is heather moorland and if you arrive here in August the purple flowering heather makes a stunning carpet.

From the monument face the way you came and set off on the narrower track running at 45 degrees (NW) across the moorland. Follow this towards a gap in the wall with a tall, stone post on either side. Go through the gap and continue along the track with the wall now on your left. When the wall ends the track forks, take the left-hand fork.

The track starts to descend, gently at first through some young trees and then quite steeply through mature woodland. Take extra care down this section as it’s quite steep and muddy in places. Ignore any paths leading off the track and continue straight down until you reach a grassy break in the trees. Continue through the woodland on the other side. Once you’ve emerged from the woodland turn right. Walk a short distance to meet another track and turn left. At this point look over to your right and you’ll see the iconic profile of Roseberry Topping in the distance.

Continue to follow the track as it runs between two rows of fences and then through a small area of woodland. The track then runs onto a tarmacked lane, follow this to emerge at a crossroads with Dikes Lane. 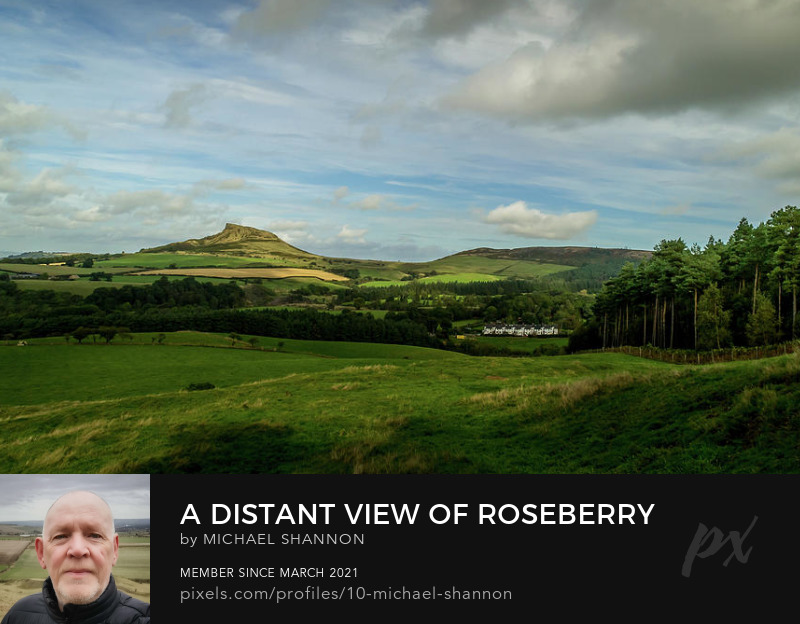 Carry on straight across the crossroads and head up Aireyholme Lane. The lane rises quite steeply and turns sharply to the right. Look out for a signposted footpath on the left-hand side. Follow this path across a field following the fence line. At the other side of the field is a gate leading to Clive Ridge Wood. Walk straight on the track through the woods for about a kilometre, passing the quarry along the way.

At the end of Clive Ridge Wood turn right to enter Newton Wood. The path through the woods rises all the time now. If it’s springtime the wood looks particularly beautiful as it is filled with bluebells. When you reach another rising track from the Roseberry Topping car park on the A173 turn sharply right and climb steeply to exit the woodland onto grassy farmland and a North Yorkshire Moors information board. Roseberry Topping is ahead and dominates the view from here.

Note: The walk through Clive Ridge Wood and Newton Wood is not the fastest route. However, it is a beautiful woodland walk. If you want to shorten your time in the woods there is a path next to the quarry on the right-hand side which brings you up to the open grassland and omits the Newton Wood part of the walk.

The path climbs now and heads straight for Roseberry Topping gradually getting steeper. There are several paths to the top, all of them obvious. Your rewards once you’ve gasped your way to the summit, are the splendid views. These extend down across Teesside, Guisborough and across to the North Sea. Look south and you can pick out Captain Cook’s Monument and the Cleveland Plain as it rises to meet the moors. On a clear day, you can see right across to the Pennines.

From the trig point head along the ridge of Roseberry Topping, then drop steeply down to the saddle of Roseberry Common. Cross the common and regain most of the height you’ve just lost, following the path as it runs alongside a stone wall. When you reach a gate on the ridge, continue through, and head right at the fork following the National Trail acorn symbol. You are now on the Cleveland Way which is a well-marked broad trail running along the crest for 2 km. Follow the signs as the path exits the moorland and drops down to the car park below.

holidaycottages.co.uk help people find their perfect cottage in popular holiday destinations across the whole of the UK. Dog-friendly cottages, farmhouses or apartments they have something to suit all budgets and requirements. Find your perfect holiday cottage in North Yorkshire here.

Want to save this article for later? Pin the image below.