This walk from Porthcurno to Land’s End goes along one of the most spectacular pieces of coastline in Cornwall. It boasts amazing views all along its route and there are beautiful rock formations and unspoiled beaches to admire. If you walk the route in summer a carpet of colourful wildflowers covers the clifftops. The coast and cliffs here are exposed to the full brunt of Atlantic storms with strong waves constantly battering the granite cliffs. There have been numerous shipwrecks along this stretch of coast.

The walk starts from the award-winning beach at Porthcurno, passing the beaches at Porth Chapel, PorthGwarra and Nanjizal Cove before arriving at the visitor attraction/theme park at Land’s End. The whole route follows the South West Coast Path.

If you are lucky you might see the rare Chough. A tiny population live along the coast here. This member of the crow family has an all-black plumage with a red bill and legs. The Chough features on the Cornish Coat of Arms. According to legend, King Arthur was turned into one when he died.

If you only want to walk one way there are regular buses running between Lands End and Porthcurno. The same service runs further afield to Penzance and St Ives.

For more information about Porthcurno, its beaches and the Minack Theatre see my separate post.

OS Explorer 102 Map. The Explorer 102 Ordnance Survey Map covers this part of Cornwall. The map displays the area of Land’s End, Penzance, St Ives and the South West Coast Path. With this map, you also get a code for use on your iOS or Android smartphone or tablet. The Explorer Map is available in both the standard paper version and weatherproof ‘Active’ version.

There is a private car park at Porthcurno. During summer and bank holidays, the car park gets very busy and it fills up quickly. There is nowhere else to park if the car park is full. So if you’re visiting in summer I’d suggest an early start, or park at Penzance or Lands End and use the bus service from Land’s End or Penzance.

Porthcurno is 10 miles from Penzance, use postcode TR19 6JX to get to the car park.

Please note if you are driving from Penzance your Sat Nav will direct you via the B3283 through the village of St. Buryan. This road has narrow sections that often get blocked in summer, which leads to long delays. An alternative route is to keep on the A30 through Sennen, then straight onto Trevescan (don’t follow the satnav) and then follow the brown tourist signs for Porthcurno and The Minack Theatre.

Walk from Porthcurno to Porthgwarra

The walk starts from the beach at Porthcurno. You can access the South West Coast Path from the top of the beach or, if the tide is out, steps from the beach. The climb up the cliff is quite strenuous. Be careful climbing this section as it is quite steep and often busy with people heading towards the Minack Theatre. At the top of the cliff, the path cuts across the Minack Theatre’s car park. Sadly you cannot see the Theatre, for that, you have to pay to visit (well worth it, if you have the time).

The footpath continues at the western end of the car park. It now heads towards Pedn-Men-An-Mere where there are spectacular views back towards the viewpoint at Horace. The path continues around the point and descends towards Porth Chapel. This cove with a sandy beach is often deserted. The Coast Path goes above the back of the beach.

After passing St Levan’s Well the path climbs towards the small headland at Carn Scathe. Cutting across the back of the headland the path takes a direct route down to the hamlet of PorthGwarra. Close to the village, the path meets a lane that descends to the entrance of a tunnel cut in the rock. The tunnel leads down to a small rocky cove and beach. The tunnels through the cliff to the beach were made by miners from St Just to help people collect seaweed, which is used as fertilizer.

Note there is a seasonal dog ban here in July and August between 10 am and 6 pm. In the hamlet, there is a small cafe/shop.

The headland is a great place for birdwatching and spotting marine life far below. Dolphins, Porpoises, and Grey Seals are often spotted and if you are really lucky you might even see a Basking Shark or a Whale. Basking Sharks are occasionally seen between April and September. Many birdwatchers come to Gwennap Head in the hope of seeing seabirds such as Gannets, Manx Shearwater, Fulmars, Cormorants Guillemots, Razorbills, and Shags.

The views from Gwennap Head are extensive in all directions. On a clear day, you can see as far as Lizard Point, the Isle of Scilly and the Land`s End peninsula.

There are lots of paths on this section of the walk, some of which look like tempting shortcuts, but leave the coastline and you’ll miss the best bits of the walk. After the Coastwatch Station pass the two cone-shaped landmarks, the bright orange and black objects.

This is a rock pinnacle about a mile offshore. This is marked by a buoy which if you look carefully, you might see. It has a bell that peals as waves move past it.

Lots of divers come here to explore the many shipwrecks that have floundered at this location.

The rocky cliffs and rock stacks are very spectacular along this stretch but please be careful the path goes very close to the edge and a sheer drop! Be especially careful if it is windy (it often is). If you have a dog you might want to put him/her on a lead. There are signs here warning of the dangers of loose dogs running around on the clifftops and having to be rescued after falling or worse falling to their deaths.

The path continues along the clifftops, passing some minor headlands which are worth visiting if you have enough time for a short diversion. The buildings at Land’s End can be seen from this part of the walk, although they are still some distance away.

After reaching Carn Les Boel the path descends down a series of steps to sea level and the stunning, rocky beach at Nanjizal.

The stunning beach at Nanjizal is in a boulder-strewn cove that has very clear water which is a beautiful blue colour. The beach has a narrow sea cave. It also seems to attract wild horses. Dogs are allowed all year round. If you go for a swim be aware that there is no lifeguard cover and the current is very strong.

If you have visited the beach, return up the steps to the footbridge and follow the path along the hillside around the other die of the bay. In places, the path is quite narrow and there is a steep drop in places, particularly as you approach the small cove at Zawn Reeth.

The path continues to climb as it passes behind the headland of Carn Boel. In a short while the path reaches Pordenack Point where there are excellent views of the offshore islets of the Armed Knight and Enys Dodnan.

The path then passes through Greeb Farm which is part of the sprawling Land’s End complex. The visitor centre is signposted from here. At the visitor centre, there are a number of attractions, fast-food outlets, shops and of course the famous signpost. If you catching a bus, the bus stop is at the bottom end of the car park.

To find out more about Land’s End read my separate post. 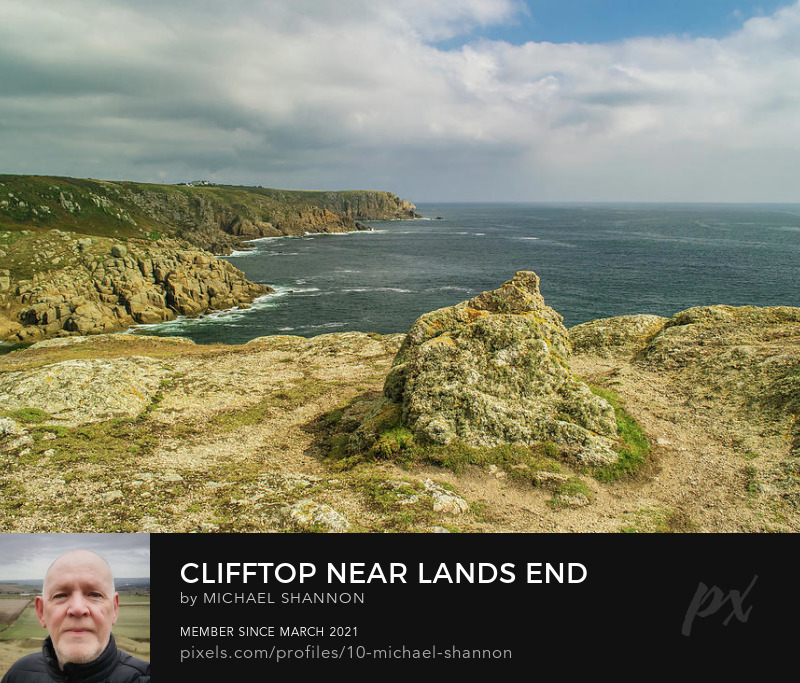 If you are walking with a dog this is a dog-friendly walk with only a couple of kissing gates to negotiate. My spaniel managed the walk easily, I did have him on his lead along a lot of the clifftop sections though.