This walk starts near the legendary Tintagel Castle and heads along the clifftops. After passing a number of rugged headlands and coves it finishes in the picturesque village of Boscastle. There is quite a long descent and ascent into and out of Rocky Valley in the middle of the walk. The route also has several other descents and ascents, but nothing too arduous. The only descent to sea level is at the end when your reach Boscastle. The whole route is full of incredible views of this unspoiled and wild stretch of coastline. Large parts of the route are owned by the National Trust.

There are plenty of places in Tintagel and Boscastle where you can buy refreshments. However, there is nowhere along the route itself.

The route follows the South West Coast Path along the whole of the route, with optional detours onto the headlands.

There are some gates and styles to negotiate, however, my dog (spaniel) had no problems at all with this route. There are though a few sections where the path is quite close to the cliffs. I felt I had to keep him on his lead past these sections.

Follow Tintagel signs from the A39 at Camelford along the B3266 and then the B3263. There is plenty of Pay and Display car parking in Tintagel village. Arrive early and you might be lucky and find a space on Atlantic Road which leads up to Camelot Castle. If it’s summertime the village and car parks do get very busy. Tintagel Castle is one of the most visited places in Cornwall.

Using public transport, the number 95 and 96 bus service will get you to Tintagel from Wadebridge, Camelford, Boscastle, Widemouth Bay or Bude. The same service can be used to return to Tintagel from Boscastle if you only want to walk the route in one direction.

If you walking the South West Coast Path from Trebarwith Strand, the village centre is bypassed as the route stays next to the coastline. Once you are in Tintagel walk past the entrance to Tintagel Castle. Then continue down the side of the valley to Castle Road. You’ll meet the road next to the toilet block. Once on the road, head left downhill. Walk past the Beach Cafe. The South West Coast Path continues on the right up the cliff towards Barras Nose. This is the first headland of the walk.

If you want to visit the village turn right at the toilet block and head uphill.

If you’ve managed to park on Atlantic Road near Camelot Castle, walk towards the castle. Just before the entrance, there is a path on the right that leads down to Barras Nose.

If you have parked in one of the village’s car parks you can walk down the main street, past the Old Post Office and then down Castle Road. Just follow the crowds heading for Tintagel Castle and continue downhill. Once at the Beach Cafe, pick up the South West Coast Path. Instead of going down Castle Road, you could continue to follow the main street around to where it turns into Atlantic Road. Now walk up to Camelot Castle and follow the path down to Barras Nose.

The Explorer 111 Ordnance Survey map covers this part of Cornwall. The map displays the area of Bude, Boscastle & Tintagel, and the South West Coast Path. With this map, you also get a code for use on your iOS or Android smartphone or tablet. The Explorer Map is available in both the standard paper version and weatherproof ‘Active’ version.

Walk from Tintagel to Rocky Valley

Wherever you started your walk, you’ll arrive at the neck of the headland of Barras Nose. The coastal path runs past the headland. However, it is well worth a detour along the path to the end as there are some amazing views. Look south and you have excellent views of Tintagel Castle, Merlin’s Cave and the beach if the tide is out. Equally impressive is the view to the North. The coastline where you’ll be walking is laid out in front of you. The headland narrows at the end. The view down the cliff to the rocks and sea is very impressive, as long as you have a head for heights! Do be careful though as the cliff is quite precipitous.

Leaving Barras Nose behind turn left onto the Coast Path and head northwards. The coastal path keeps fairly close to the cliffs along to the next headland Willapark. Rather confusingly the headland overlooking Boscastle harbour is also called Willapark. If you have time, this is worth a detour for a close-up view of Lye Rock. This is almost detached from the mainland. The Two Sisters Rocks off the end of the headland have become detached and are now islands. These are popular spots for nesting seabirds, Guillemots and Razorbills mostly. Again the headland offers some stunning views of the coastline. The views can be very dramatic especially if there is a heavy sea adding crashing waves at the bottom of the cliffs.

Regain the Coast path and it now drops to Bossiney Haven before climbing up again. At sea level is the stunning Bossiney Cove which at low tide has an excellent beach. Because of its location, it is quite secluded and private. At low tide, the beach runs around to the neighbouring Benoath Cove. However, the last time I visited (2021) the steep access path was closed (due to a rockfall).

As well as the amazing beach, Bossiney Cove is famous for a cliff formation in the shape of an Elephant. If the path is open and you can get down to the beach then dogs are allowed all year round. Note that there are no facilities, or lifeguards and the area is prone to strong rip currents.

The Coast Path around the Haven has great views. Don’t forget to look back, the picturesque view makes a stunning photograph.

The next descent takes you down into Rocky Valley where the scenery looks different and well… rockier! The valley looks very picturesque with the stream at the bottom cascading through a series of waterfalls. The Trevillet River has formed the valley as it has carved its way through the slate bedrock making its way down to the sea.

A wooden bridge crosses the stream at the bottom of the valley. 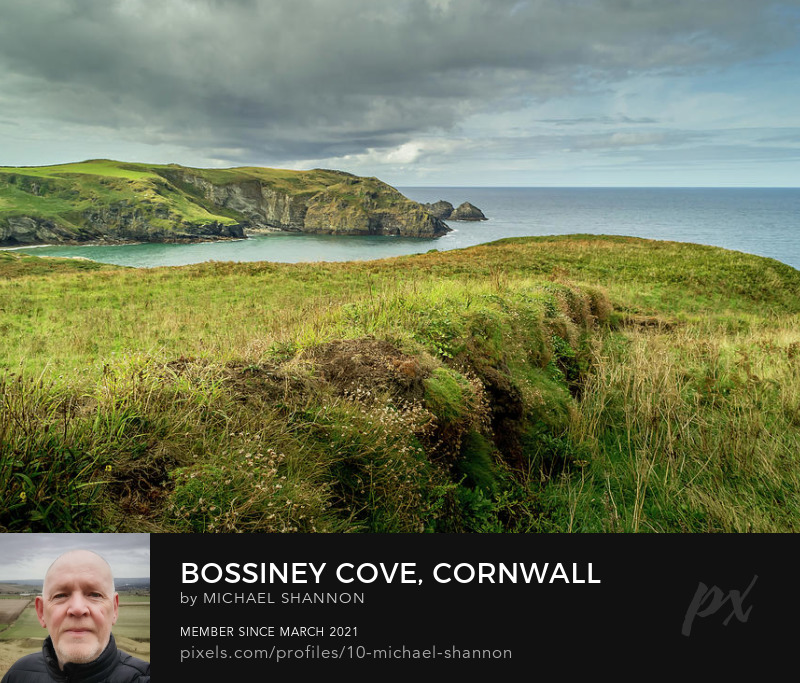 Walk from Rocky Valley to Boscastle

Follow the path on the other side of the footbridge which climbs steeply out of Rocky Valley. The path continues past a large caravan site to reach the top of Firebeacon Hill. After passing this, look on the left for a small path. This is at the point where the Coast Path makes a turn eastwards to the right. This little detour leads to a viewpoint overlooking Lady’s Window. This is a spectacular rock arch, and there is a bench here if you want to sit and admire the views for a while.

Returning to the Coast Path, it continues to rollercoaster along the cliffs, passing Grower Rock. On the headland (Willapark) ahead you should be able to make out a white castellated tower, Boscastle is not far away now.

Quarries operated along the coastline here, from the 14th Century right up until the Second World War. Working in the quarries was hazardous as the quarrymen worked suspended by lengths of rope. The slates were dressed on narrow ledges and platforms and lowered into boats below.

After a steep climb up slate steps, you come to a wooden gate on the left. Through the gate, a path detours up the headland, the second Willapark of the day, to the white tower. Originally this was built as a summerhouse in the early 1800s by a local landowner. It was later used by revenue men as a lookout for smugglers and today it’s a coastguard station. The station is only a short climb away, has magnificent views. As a bonus, you might see some of the ponies that graze on the headland.

The coastline here is notorious for shipwrecks including the Jessie Logan in 1843. The ship floundered on the rocks in a heavy gale with the loss of 36 people.

The path now drops down to the southern side of the beautiful harbour at Boscastle. From the harbour, it’s a short walk up to the village which is full of character. As you walk around it’s hard to believe that Boscastle was the victim of a horrendous flood in 2004.

The flood washed 75 cars, 5 caravans and 6 buildings out to sea.

There is a regular bus service from Boscastle to Tintagel so if you don’t want to walk back you can catch the bus. The walk from Tintagel to Boscastle and back takes around 5 hours. 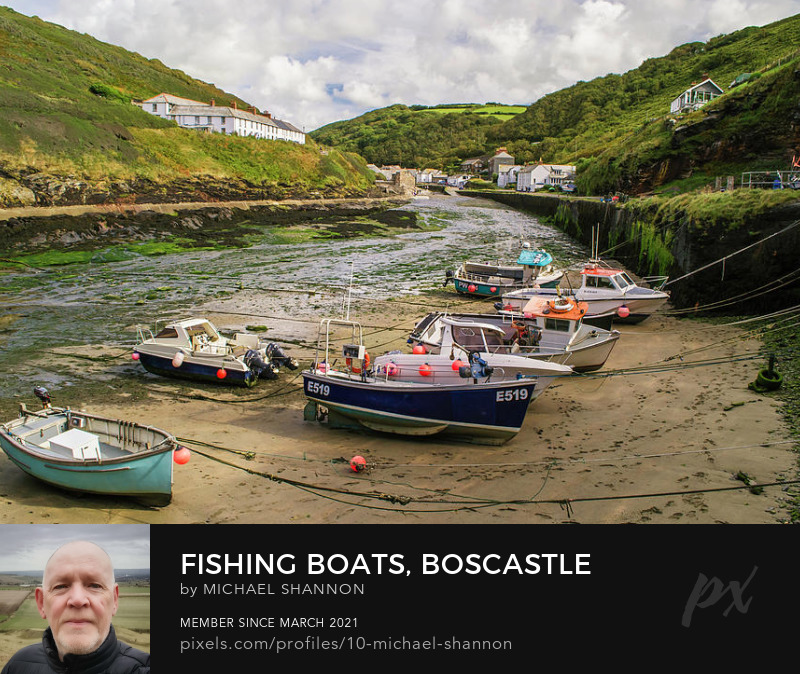